Check out GenX Tavern for a Throwback Night Throw it back to the ‘80s and ‘90s at downtown Tampa’s new tavern! GenX Tavern is unlike most taverns because everything is based on the ‘80s and ‘90s from the food, decor and experience! If you’re feeling nostalgic for the good ol’ days and want a night out, visit this fun and exciting new tavern for your next night out!

GenX opened May 4 in downtown Tampa and has been a hot spot for brunch, lunch, dinner or a night out. And even better – it’s the kind of place you can rock some of the vintage clothes hiding in the back of the closet. 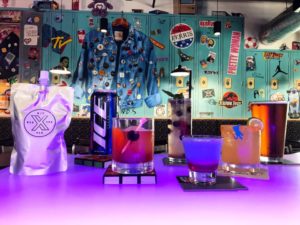 GenX has two food menus – the brunch/lunch menu and the regular menu. The brunch/lunch menu features classics like french toast and breakfast burritos. There are also fun options like the Sunday Morning Comedown which is four pieces of bacon, an egg, and a beer, or the 6 degrees of Kevin Bacon which includes six pieces of bacon, lettuce, tomato and mayo on sourdough. To wash down brunch, try the Loaded Bloody Mary which includes a fried ravioli, cheese curd, and a corn dog nugget garnish! Yes, please!

The regular menu has lots of party starters, including fried pickle chips and waffle fry nachos. For those who want something healthier, there are plenty of salads on the Richard Simmons salads and bowls list, including a Happy Gilmore Wedge with lettuce, gorgonzola, tomato, chives and bleu cheese dressing. Bigger meals consist of sandwiches and burgers such as the Friends themed Moist Maker Sandwich or the Hellraiser sandwich. For sides, patrons have six options, including old fan favorites: Spaghetti-o’s and Rice-A- Roni! GenX has a bubbles and wine menu, but the restaurant is known for its liquor drinks. The cocktail menu features 19 cocktails and 10 shots, all ‘80s or ‘90s themed. Cocktails range from the Breakfast Club Martini with Bombay Sapphire, Cointreau, lemon juice and orange marmalade, to the You Down Wit’ Opp with Milagro tequila, agave, lime, tang, and a tang rim. Their signature cocktail is an “Adult Capri Sun,” which comes in three flavors: pineapple, cherry, and strawberry kiwi. It has a twist cap instead of a straw, but the pouch will for sure give you childhood flashbacks! If your more in the mood for a shot – you might try the Top Gun Shot Flight, or maybe the gusher shot is more your style! Around Gen X are mementos of the ‘80s and ‘90s. You will see the popular arcade game-skeeball as well as a shelf full of some of the best board games from the decade including Guess Who, which you may have forgotten even existed. TVs are scattered throughout the tavern displaying ‘80s and ‘90s TV shows and movies. There are some TVs from previous decades that patrons can play old versions of games like Mario!

GenX is decorated with lots of photos of famous people like Patrick Swayze and Tom Cruz. Momentos line the walls including stickers and drawings of old favorites like decorated denim jackets and VHS tapes. Bright lights line the ceiling along with disco balls. Being surrounded by all these things will bring back old, but hopefully fond memories!